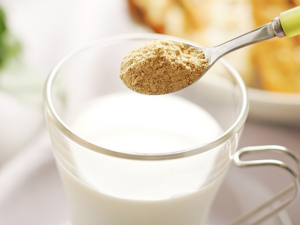 Have you ever heard of 'Kinako'?

Kinako is a powder commonly used in Japanese cuisine especially traditional Japanese sweets such as Dango, Mochi and Ohagi.

Although it is known that soybean contains abundant nutrition, there was a problem that soybean was difficult to digest.
As a result, despite America being the world's largest producer of soybeans, most Americans do not eat soybeans.
Now, in America, soybeans are mainly used for food for livestock.

Kinako can solve this difficulty in digesting soybeans. Because Kinako is roasted in powder form, it is easier to digest.

In recent years, Kinako is especially popular among Japanese women who have high awreness of beauty and health.
They take Kinako powder with milk. This is because that conbination between Kinako and milk is so great for beauty and health.
Of course I drink Kinako milk every day.

Today, I will introduce various effects obtained from Kinako milk and how to make it.

Isoflavone contained in soybean which is the raw material of Kinako has antioxidant effect and beautiful skin effect. Kinako is said to have the most isoflavones among processed soy products.

It also helps to relieve constipation due to the intestinal effect of soybean oligosaccharide and dietary fiber.

Saponins in Kinako has an action to boost and speed up metabolism so that you burn more calories.

It is said that it has an effect that increases a women's bust size as the action of isoflavones resembles the "estrogen", the female hormone that affects women's shape. There are many reports that actually increased the size of the chest.

Where can I buy Kinako?

You can buy Kinako at Japanese grocery stores or Asian grocery stores. If there is no such supermarket in the vicinity, I recommend you buy from Amazon.com.

Well, if you roast raw soybean flour by yourself, it becames almost same as Kinako. From experience, the taste is not as good as Kinako.

How to make delicious Kinako milk

Add one tablespoon of Kinako to milk and mix well.
It is recommended to add honey to make it easier to drink.

If you don't like milk, it is delicious to eat it with yoghurt or ice cream. (If you wish you can use soy milk.)

Do not drink too much

Since isoflavone is known to have an effect similar to estrogen, it is possible to accumulate more fat. So do not over indulge. Let's keep it one a day.

Do not forget calories

Do not drink during pregnancy

It is said that soy isoflavone works similar to female hormones. Then, it is not desirable to add it to supplements etc. by adding it to everyday eating habits during pregnancy. 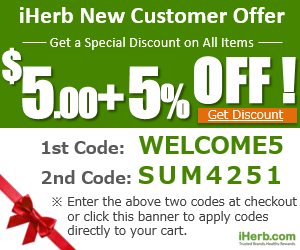 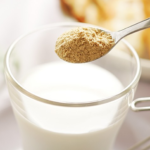